Over 100,000 years ago, prehistoric humans lived along the secluded inlets and seaside lakes of today's Varna.

Millennia later, an ancient European civilization flourished on the banks of Varna Lake and created the largest settlement of pile dwellings and stilt houses in Southeastern Europe.

2,600 years ago settlers from the Asia Minor Greek city of Millet established the ancient Odessos, the future city of Varna.

Varna today is a truly European city that has been a melting pot of diverse cultures and a crossing point of roads spanning countries and continents. Varna and the area are studded with landmarks of different periods and the city has witnessed a unique mixture of cultures and traditions that has left an indelible mark on its contemporary image.

The world’s most ancient gold ornaments, about 10 centuries older than the Egyptian ones, were discovered in Varna in the 1970s. Some sensational artefacts were uncovered back then among the burial gifts at the archaeological excavations of the Chalcolithic Necropolis near Varna (4,400 – 4,200 BC), along with numerous stone, copper and clay artefacts. Those stunning pieces were made of 24-carat gold:  stately insignia of power (sceptres, diadems and breastplates), exquisite artefacts of cult (gold and bone idols, masks with gold applications and gold amulets), plenty of filigreed gold and copper jewellery (bracelets, necklaces, earrings and rings). 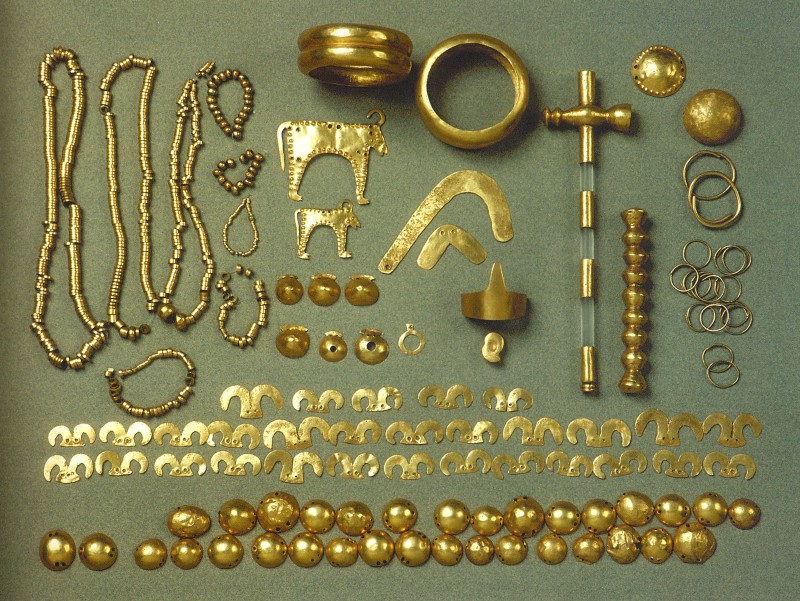 The only necropolis similar to the one in Varna in this country dates back to the same age and it is located in Durankulak to the north of Varna. About 1,000 graves and about 50 grams of gold jewellery have been uncovered there.

One of the mysteries of Varna Necropolis is that the so-called symbolic (empty) graves contained just burial objects. This might be because the grave had been intended for a warrior fallen in battle far away, a custom typical in Ancient Greece. Another possible reason why the symbolic graves had been filled with so much gold might be that more gold had been added year in, year out. Similar rituals existed later in Ancient Egypt and they required that gods such as Osiris and Isis were buried every autumn to rise from the dead every spring. It might be presumed that such customs could have existed in this area long before the ones in Egypt. 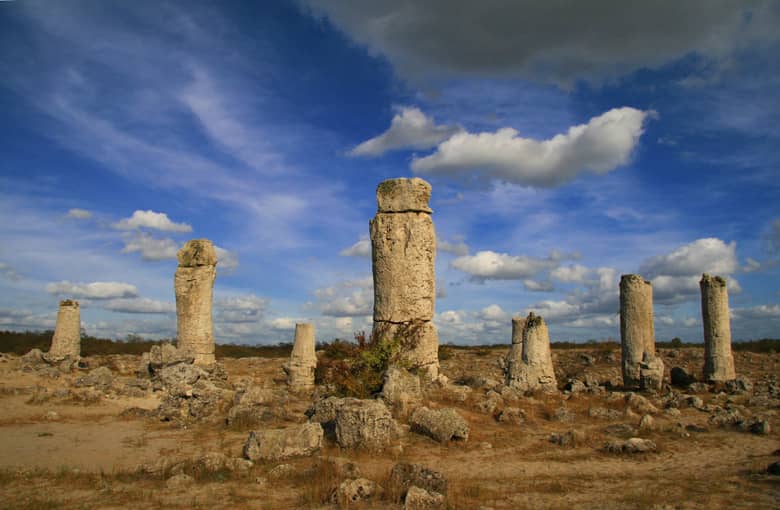 The natural phenomenon called Pobitite Kamani near Varna is made up of upright stone columns of Eocene sands that look like a stone forest. The main group consists of about 300 big and small columns, some of them rising up to six meters. The most impressive groups of Pobitite Kamani became some of the earliest protected territories in Bulgaria. Currently the whole area has a special status. 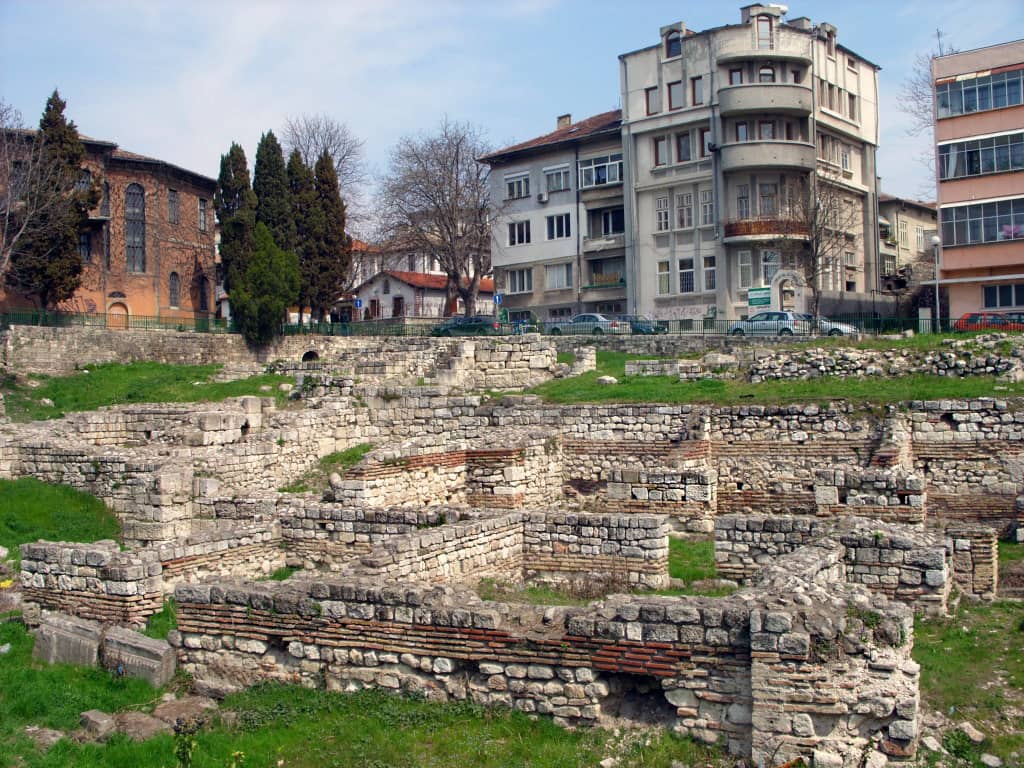 The Roman Thermae of Odessos are the third biggest in Europe and the biggest in the Balkans. Covering an area of about 7,000 square meters, they were built with a specific technology alternating a stone wall and five or six rows of dense clay bricks. The internal stairs and the door vaults were constructed of enormous stone blocks, and fragments of magnificent mosaics can still be seen in some places. They, together with the numerous marble fragments, columns and chapels, are indicative of the magnificent decoration of the building in the past. The Thermae used to function for almost a century until the end of the 3rd century. The Roman Baths functioned also as a business meetings club and a sports venue. Passing through spacious halls that created a natural barrier to the cold air, visitors entered a big hall called palestra. The heating system is one of the highlights even now as it was connected to the double floor and the special cavities leading the warm air to the roof structure of the Thermae. 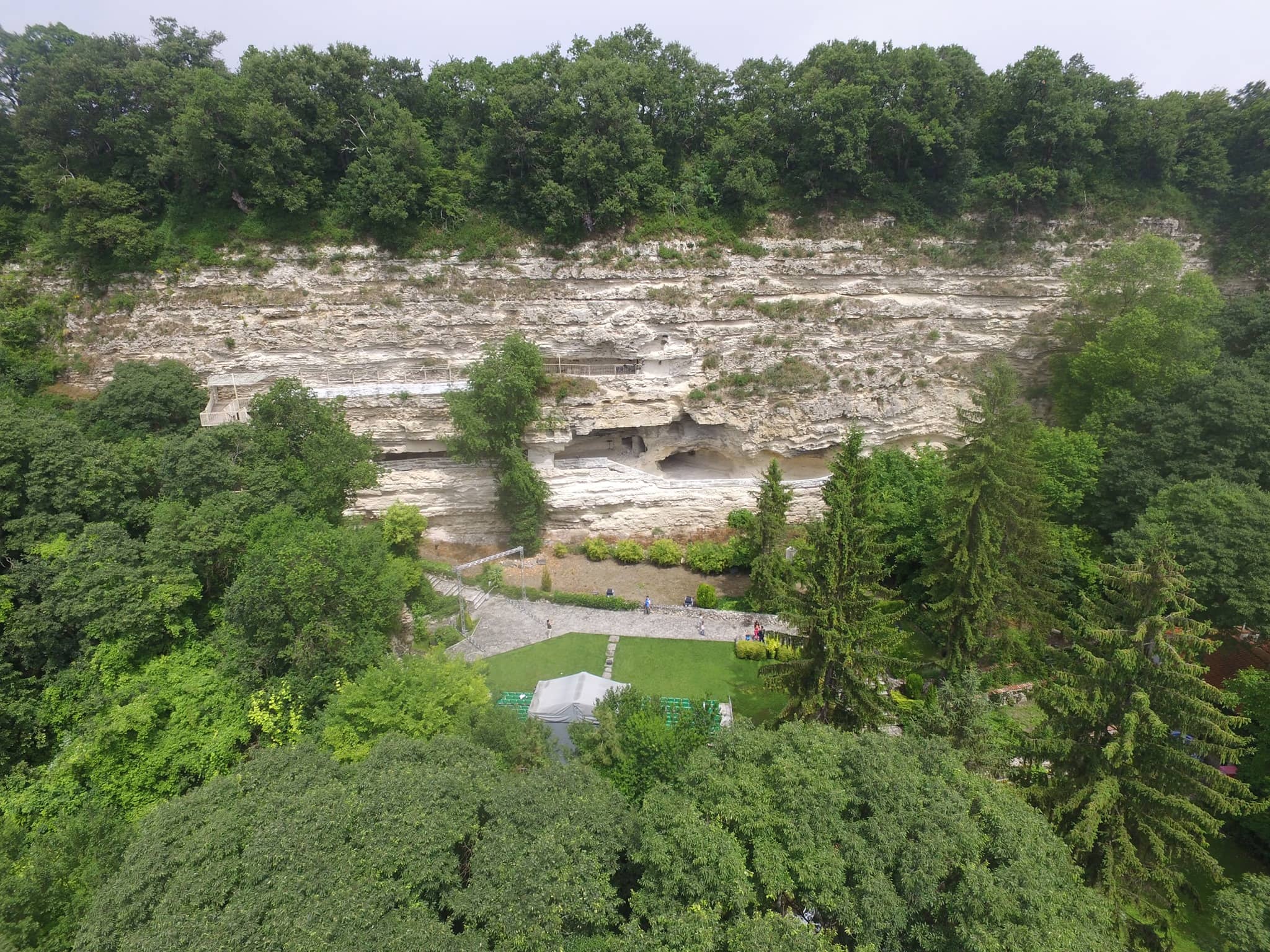 A group of caves known as the Catacombs is situated 600 – 700 m to the west of the monastery. The artefacts uncovered there – ceramics, coins, graffiti, etc. – testify that the Catacombs were used for accommodation by early Christians. This Christian monument was first excavated and thoroughly researched at the end of 19th century by the founders of Bulgarian archaeology, the Škorpil brothers, Karel and Hermann Škorpil. The site has been a museum and a tourist attraction since 1906. It is a listed national architectural monument. 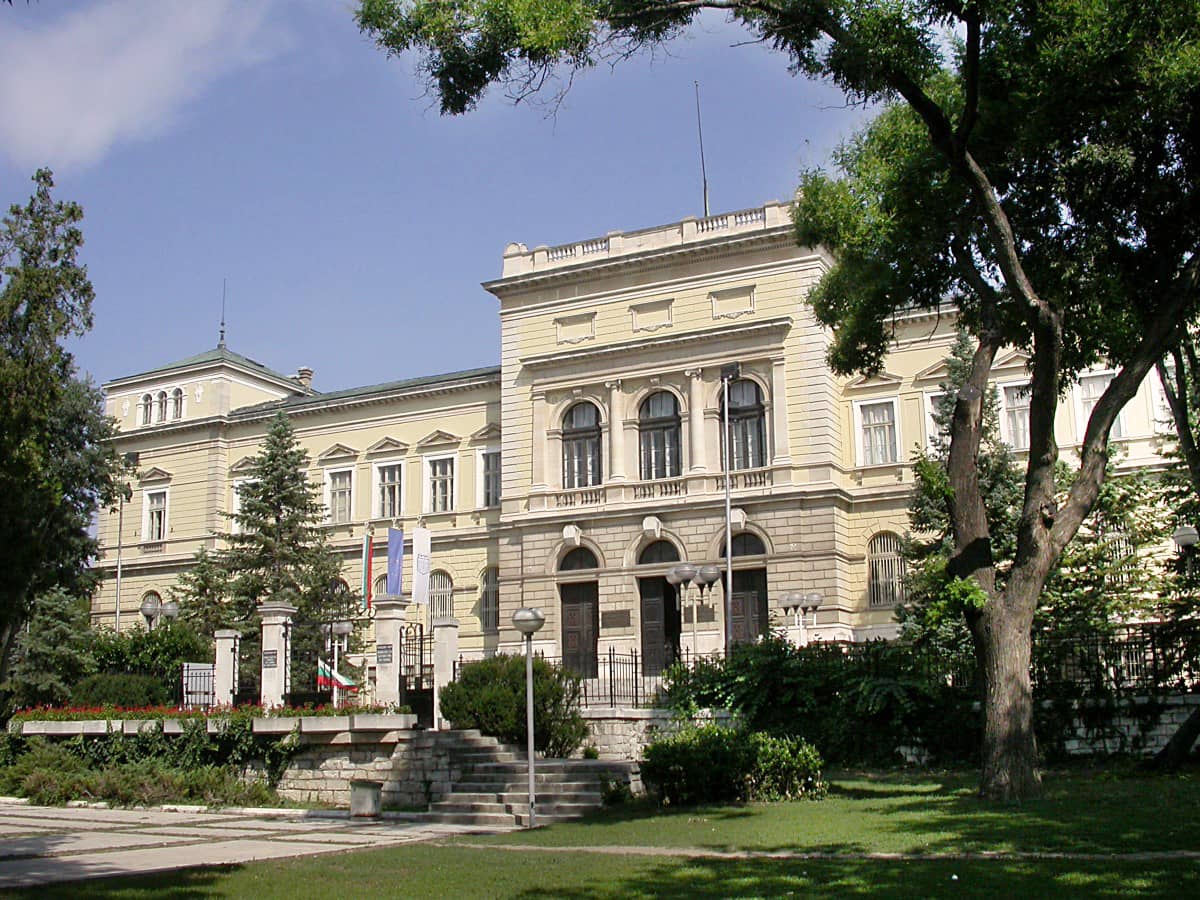 Varna Archaeological Museum is one of the largest museums in this country. It stores some remarkable and precious artefacts researched and studied by a number of Bulgarian and foreign specialists. Along with ancient cultures, the museum highlights the glamour of Bulgarian cultures over the centuries.

The National Revival Museum in Varna is housed in a historic building constructed at the end of 19th century. 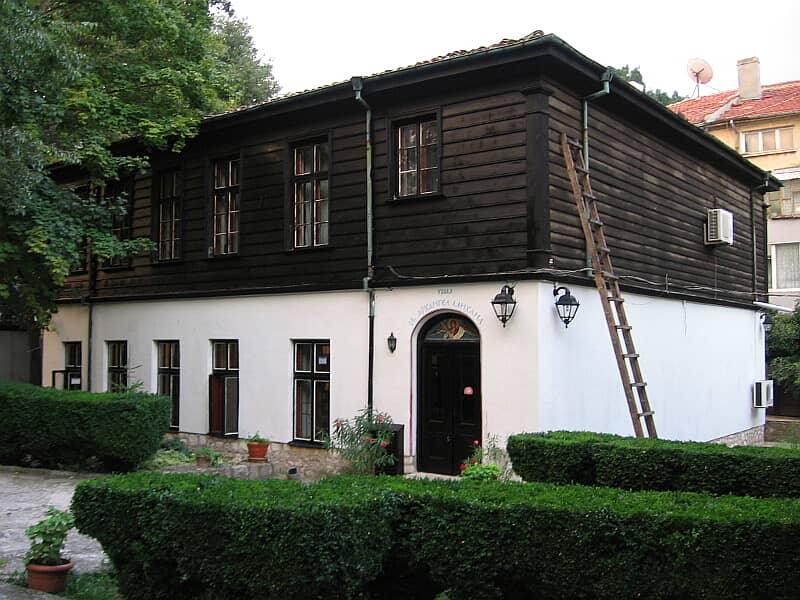 The exhibition highlights important moments of the history of Varna in the National Revival period.

One of the museum halls displays a class room of a school from the Revival period. Some highlights are the sand desks which helped children learn to write, the blackboards and the shared teaching tables in reading and mathematics, the praise medals intended to motivate pupils and the black squares intended to discipline them. The original blackboard, presented to the school as a gift in 1861, has preserved the letters of the Bulgarian alphabet.

Museum of New History of Varna

The Museum of New History of Varna showcases the development of the city as a major port, a city of trade, industry, culture and education, a national and international resort and a spa center between 1878 and 1939. The museum owns over 16,000 exhibits. 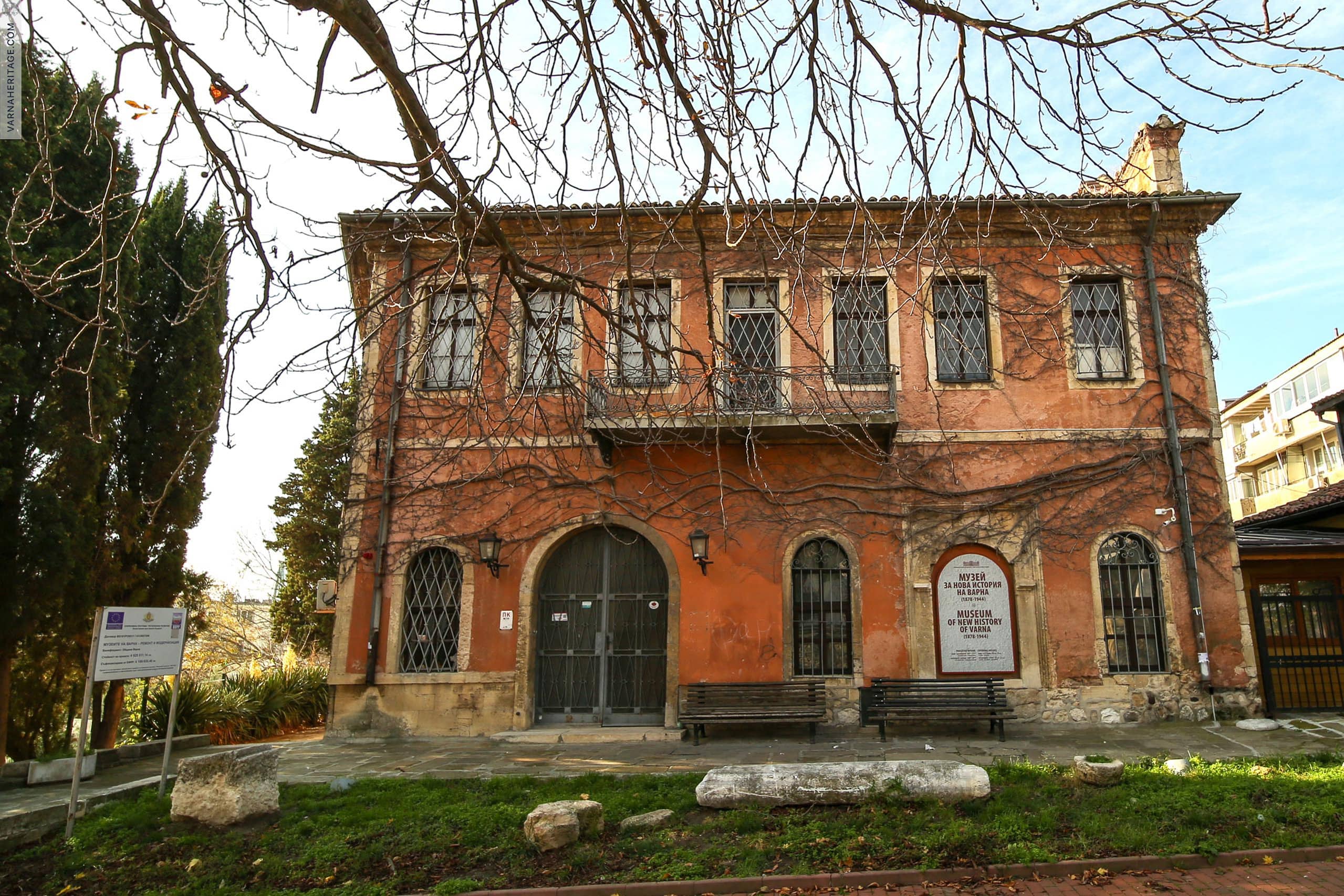 The most memorable are industrial ones such as an original Viennese printing press (late 19th century), printing letters, newspapers and books published in Varna, the city’s first factory cotton-weaving loom imported from England in 1902. The exhibits include the only docker's packsaddle that has survived in this country, used for carrying loads at the port, original photos of the stages of construction of the new port (1895 – 1906), stock and brochures about the creation of the Bulgarian Steamship Company in 1892.  Other highlights are the silver hoe and spade used by Prince Alexander of Battenberg at the ground-breaking ceremony for the construction of the Assumption of Virgin Mary Cathedral.

The spirit of the age comes alive with the furnished hotel room and restaurant which houses bottles of original liqueurs dating back to the 1920s. 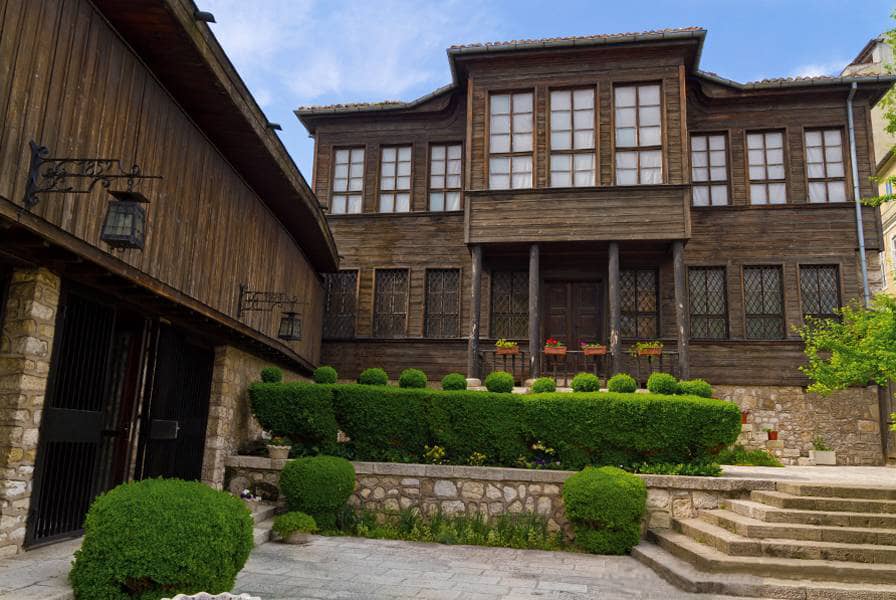 The Ethnographic Museum is situated in a house from the Revival period built around 1860. The museum displays the rich diversity of culture and lifestyles in Varna and the region at the second half of the 19th century and the beginning of the 20th century. The ground floor showcases the main professions and crafts. Some of the highlights include a small old plough used for ploughing the earth until early 20th century. The exhibition on the first floor displays traditional national costumes and offers an insight of the demographics of Varna and the region. Traditional ritual clothing worn at Christmas, on Petlyovden (Day of the Cock) and Lazarovden (St. Lazarus Day) are exhibited too.

The Assumption of Virgin Mary Cathedral

Cetrally located, the Assumption of Virgin Mary Cathedral is one of the symbols of Varna, a  temple for Varna citizens and a sightseeing site for tourists. 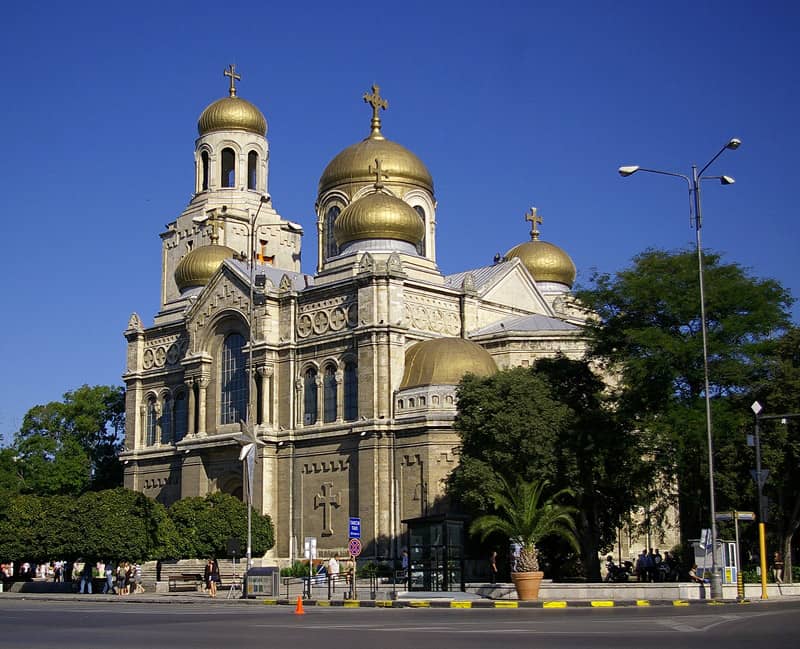 Designed by the Russian architect Maas, the cathedral was built between 1884 and 1886 by   Master Gencho Kanchev from Trjavna. It was mainly donations that financed construction. Raffle tickets for two levs were sold out in the country and abroad. Construction work amounted to BGL 324,542.88. The temple was the first in Bulgaria to commemorate the death of Russian soldiers and Bulgarian volunteers who had died for the Liberation of Bulgaria. Its location was chosen by Prince Alexander of Battenberg in 1880. At the end of 19th century it was the biggest church building in Bulgaria, and today it is the second biggest one. Virgin Mary is the city patron, and the cathedral holiday, August 15th, has been formally declared the Day of Varna. 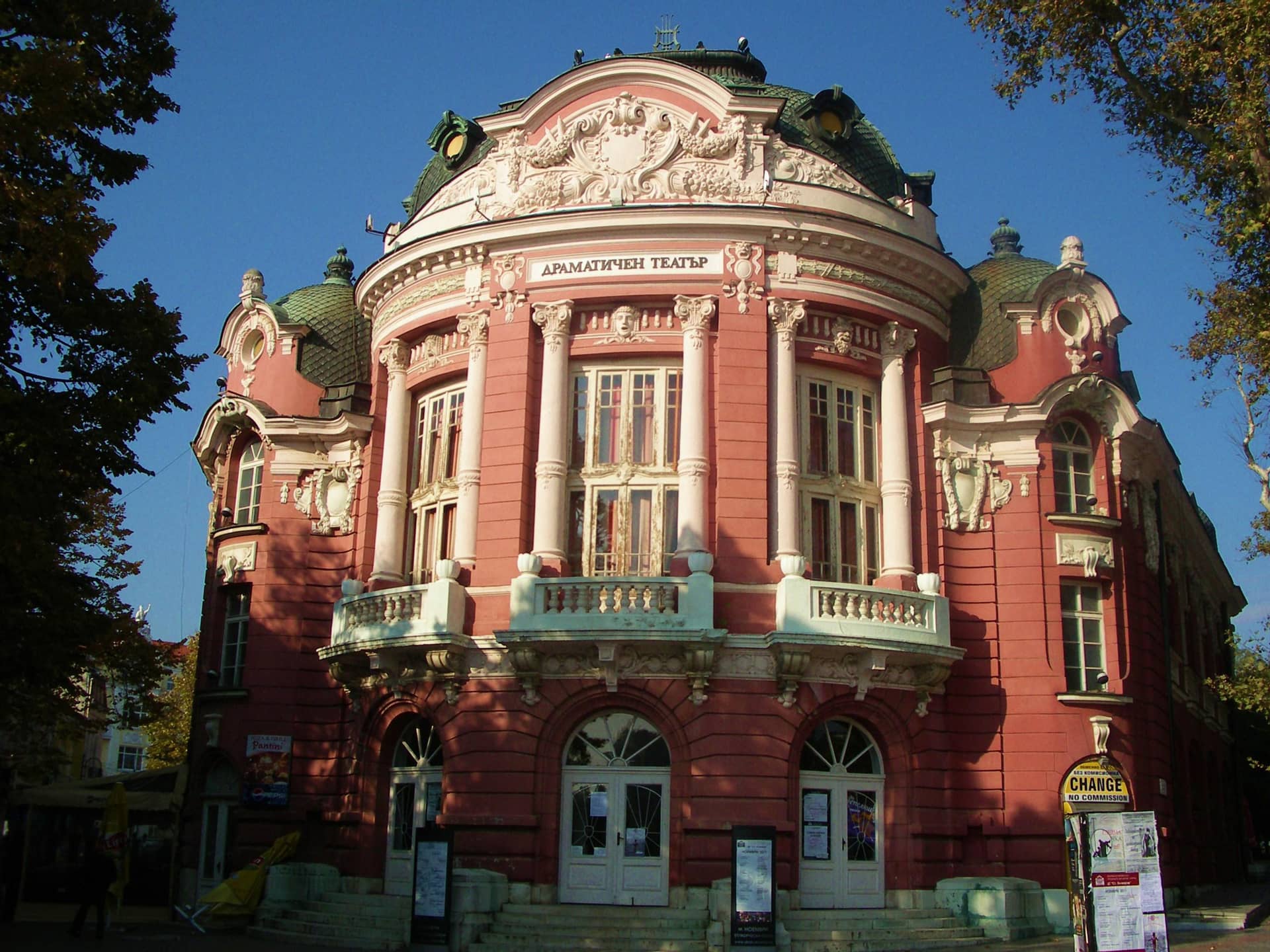 The building of the Theatre of Varna was constructed by the design of Nikola Lazarov, the architect who took part in the construction of the National Theatre of Sofia. The foundation stone was laid on 26 March 1912. Mayor Ivan Tserov rightly assessed the city’s cultural needs and highly appreciated the huge cultural significance of the theatre. The entire city took part in the noble cause of constructing the theatre building. After the initial enthusiasm the project was put on hold for some time in the war and post-war years to be relaunched again in 1927 and completed by the city architect Zhelyazko Bogdanov. The building was inaugurated on 5 June 1932.