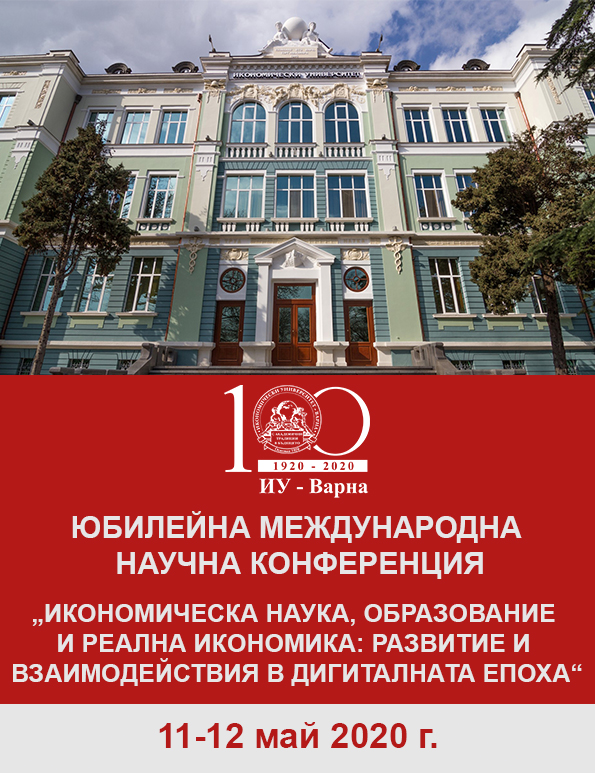 The Anniversary International Science Conference “Economical Science, Education and Real Economy: Development and Interaction in the Digital Age” was held at the University of Economics – Varna on 11-12 May 2020. The Scientific Forum was part of the celebrations dedicated to the 100th anniversary of the establishment of the first Higher School of Economics in Bulgaria.

348 scientists, lecturers, Phd Students, students, business representatives from the country and abroad took part in the Conference. Papers were presented by participants from 23 Bulgarian and 15 foreign universities.
For the first time in the history of the University the Anniversary International Science Conference was held entirely online in virtual rooms. In the plenary session alone registered more than 200 participants. The sessions in the sections continued in 11 virtual rooms with presentations of results from scientific research.

20. Assitant Prof. Irena Erbakanova Varna University of Management, Bulgaria
To APP or Not to APP: Using Mobile Applications in The Marketing of Small Cities and Remote Tourism Destinations

Section INFORMATION AND COMMUNICATION TECHNOLOGIES IN THE ECONOMY AND SOCIETY

Section EDUCATION AND SCIENCE IN THE DIGITAL AGE

Section LANGUAGES AND LANGUAGE EDUCATION IN THE DIGITAL AGE